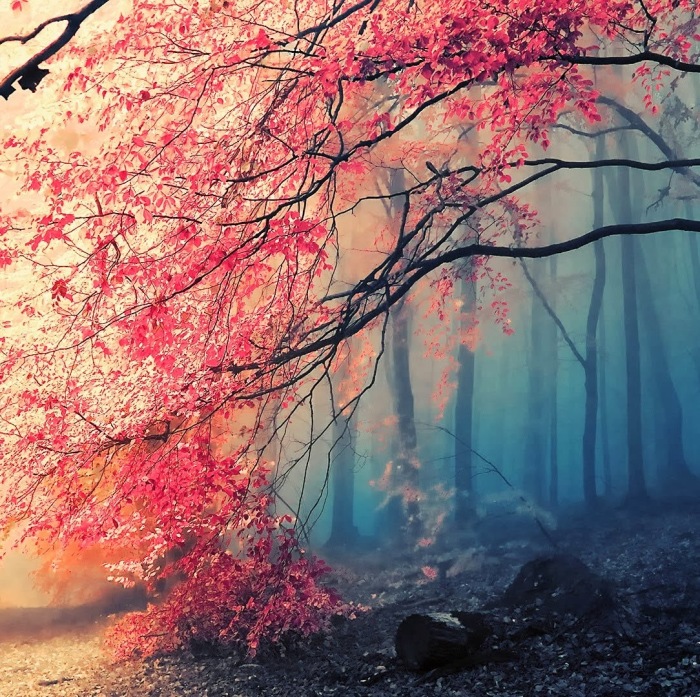 “He who has God thus essentially, takes him divinely, and for him God shines forth in all things, for all things taste divinely to him, and God’s image appears to him from out of all things. God flashes forth in him always, in him there is detachment and turning away, and he bears the imprint of his beloved, present God.”

Thus says Meister Eckhart in Chapter Six of his Talks of Instruction delivered to Dominican novices early in his career when Prior of Erfurt. For Eckhart, even at this early stage, God is not to be found in special places or practices but in the divine splendour of the everyday. One does not need to retreat to the desert or even to the church to find God, one needs rather to discover the ‘inner desert’ and see the divine in whatever the present moment brings.  I present the text here in full and without commentary. Enjoy.

On Detachment and On Possessing God

I was asked, ‘Some people shun all company and always want to be alone; their peace depends on it, and on being in church. Was that the best thing?’ And I said, ‘No!’ Now see why. He who is in a right state is always in a right state wherever he is, and with everybody. But if a man is in a wrong state, he is so everywhere and with anybody. But if a man is in a right state, in truth he has God with him. Now if a man truly has God with him, God is with him everywhere, in the street or among people just as much as in church or in the desert or in a cell. If he possesses God truly and solely, such a man cannot be disturbed by anybody. Why?

He has only God, thinks only of God, and all things are for him nothing but God. Such a man bears God in all his works and everywhere, and all that man’s works are wrought purely by God – for he who causes the work is more genuinely and truly the owner of the work than he who performs it. If we then have none but God alone in mind, then he must really do our work, and God’s work can be hindered by none, nor by any company or place. Therefore, no one can stop such a man, for he regards, seeks, and tastes nothing but God, for God is united with that man in all his aims. And just as no multiplicity can scatter God, so nothing can scatter or diversify that man, for he is one in the One, where all multiplicity is one and is non-multiplicity.

A man should receive God in all things and train his mind to keep God ever present in his mind, in his aims, and in his love. Note how you regard God: keep the same attitude that you have in church or in your cell, and carry it with you in the crowd and in unrest and inequality. And – as I have often said – when we speak of ‘inequality,’ this does not mean that one should regard all works as equal, or all places or people. That would be quite wrong, for praying is a better task than spinning, and the church is a nobler place than the street. But in your acts you should have an equal mind and equal faith and equal love for your God, and equal seriousness. Assuredly, if you were equal-minded in this way, then no man would keep you from having God ever present.

But if God is not thus truly in a man, but has to be got from without, from this and that, if he seeks God in unequal fashion, whether in deeds or in people or in places, that man has not got God. And that man may easily be distracted, since he has not got God, and does not seek God alone, or love and strive for God alone. Accordingly, he is put off not only by bad company – even goodness is a hindrance to him: not only in the streets but even in the church, and not only evil words and deeds but even good words and deeds, for the blockage is within himself because in him God has not become all things. If this were so, then he would be happy and at ease everywhere and with everybody, for he would have God, whom none can take from him, nor could any hinder his work.

Wherein lies this true possession of God – this really having him? True possession of God depends on the mind, an inner mental turning and striving toward God – but not in a continuous and equal thinking of him, for that would be impossible for nature to strive for, very difficult and not even the best thing. A man should not have, or be satisfied with an imagined God, for then, when the idea vanishes, God vanishes! Rather, one should have an essential God, who far transcends the thought of man and all creatures. Such a God never vanishes unless a man willfully turns away from him.

He who has God thus essentially, takes him divinely, and for him God shines forth in all things, for all things taste divinely to him, and God’s image appears to him from out of all things. God flashes forth in him always, in him there is detachment and turning away, and he bears the imprint of his beloved, present God. It is just like a man who is terribly thirsty: he can do other things beside drinking and can even turn his mind to other thoughts, but yet, whatever he does and in whatever company he is, whatever he intends, whatever he thinks or does, he never loses the thought of drinking as long as his thirst lasts; and the greater the thirst, the greater and deeper and more present and persistent will be the thought of a drink. Or if there is a man who is so passionately devoted to a thing that nothing else interests him or touches his heart, he is intent on that thing and nothing else; quite certainly, wherever or with whomever that man is, and whatever he takes up or does, the image of what he loves never fades in him, and he finds its image in everything, and it is ever the more strongly present to him, the more his love for it increases. And that man will not seek rest, for no unrest disturbs him.

That man finds greater praise before God, for he takes all things as divine, and as greater than they are in themselves. Indeed, this requires zeal and love and a clear perception of the interior life, and a watchful, true, wise and real knowledge of what the mind is occupied with among things and people. This cannot be learned by running away, by fleeing into the desert away from outward things; a man must learn to acquire an inward desert, wherever and with whomever he is. He must learn to break through things and seize his God in them, and to make his image grow in him in essential wise.

It is just like learning to write: truly, if a man is to acquire this art, he must apply himself and practice hard, however heavy and bitter a task it seems to him, and however impossible. If he is prepared to practice diligently and often, he will learn and master the art. Of course, at first he has to remember every letter and fix it firmly in his mind. Later on, when he has acquired the art, he will be completely free of the image and will not have to stop and think, but will write fluently and freely – and the same with playing the fiddle or any other task that requires skill. All he needs to know is that if he intends to exercise his skill, and even if he is not paying full attention, wherever his thoughts may stray, he will do the job because he has the skill. Thus a man should be pervaded with God’s presence, transformed with the form of his beloved God, and made essential by him, so that God’s presence shines for him without any effort; rather he will find emptiness in all things and be totally free of things. But first there must be thought and attentive study, just as with a pupil in any art.

One thought on “Meister Eckhart on seeing God in everything”